This is the first verse of a beautiful song from many years ago, which, right now, brings to mind the hatchery in Piantonetto, where maybe not a hundred thousand but surely a myriad minuscule eyes are slowly making their appearance in the bright orange carpet formed by layers of marble trout eggs waiting to hatch. They are so tiny! 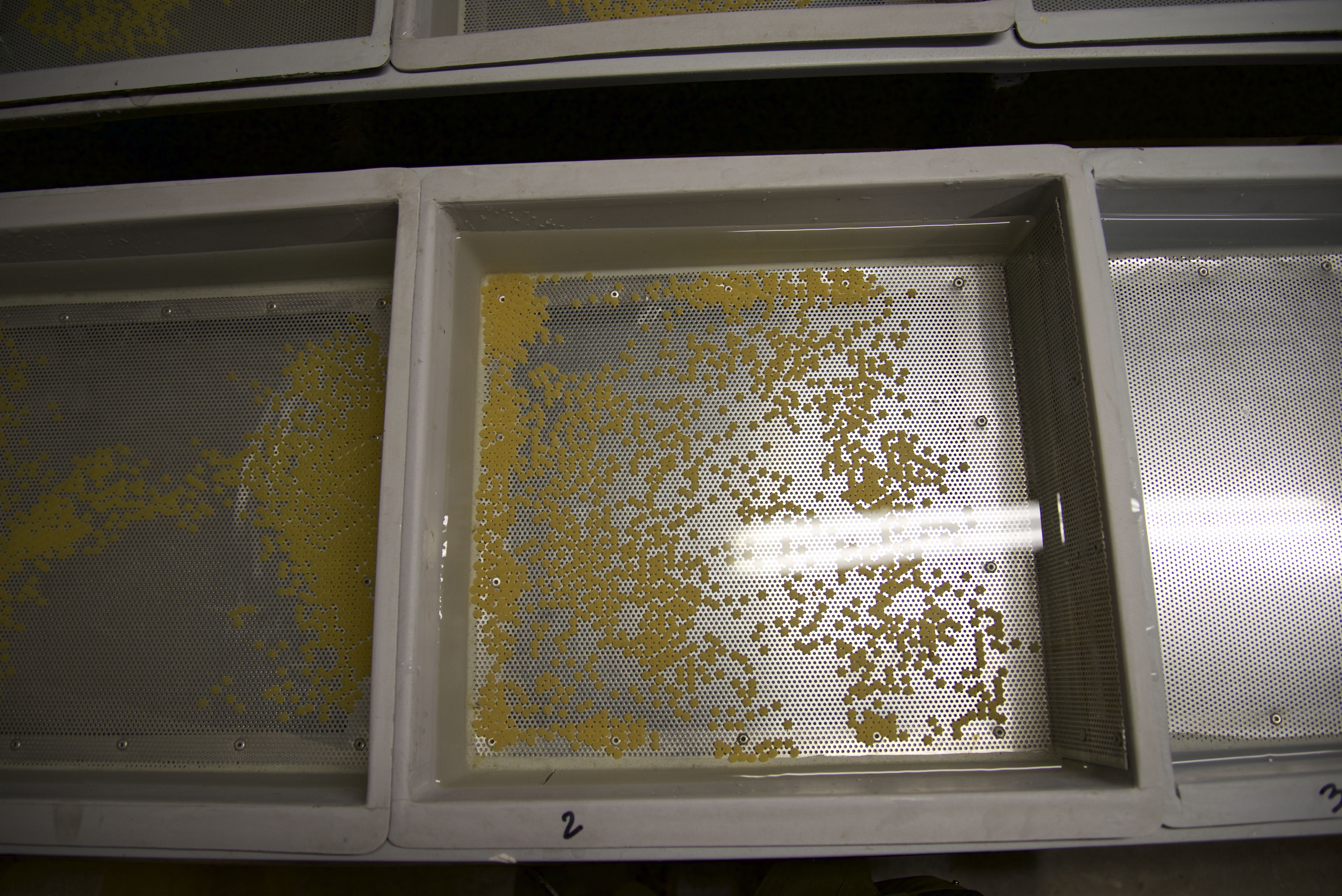 In the hatchery of the Gran Paradiso National Park the eggs are kept in incubation baskets where suitable oxygen levels are maintained by a continuous water flow.

Thus, in a controlled environment, the appropriate conditions make it possible to bring about the final act of a magic event which takes place - more and more rarely - in the Alpine and sub-Alpine brooks and rivers of the Po River basins, every year, when the cold season sets in:

The reproduction of the marble trout

In autumn at higher altitudes and at a later date, during the cold season, in the plains, the marble trout swims over distances of varying lengths to reach a suitable spawning site. The lake populations that have adapted to the habitat of the great pre-Alpine lakes may be said to undertake a veritable migration between different ecosystems: every year, the trout leave the lake and swim up the tributaries seeking an area with clearly defined characteristics.

When it begins to feel the urge to reproduce, the marble trout sets out on its search for gravelly and pebbly bottoms, where the current is mild and constant. The choice of such places is not random! In these places, where, as  a rule, the water is no more than 1 metre deep, many individuals may come together and fight over the spawning site or over access to the females: these fish (and fish in general) know exactly where to find the right conditions to ensure that their eggs will develop properly.

Normally, the males arrive first and wait for a long time, for weeks even, for the females to arrive. Once she is ready to spawn, the female beats the bottom with her tail and creates a shallow nest depression proportional to her size. Then, possibly in several runs, the trout releases her eggs, which are promptly fertilised by the dominant male and sometimes also by smaller individuals (called “satellites”), which interpose themselves between the female and the larger male, and sometimes manage to fertilise a small proportion of the eggs that are being laid in the water. While the eggs are fertilised, the female moves a thick layer of gravel which, driven by the current, covers the eggs.

The river will preserve this treasure, hidden in the riverbedand yet alive and continuously provided with the indispensable amount of oxygen by the water circulating through the interstices between the sand and pebbles that cover the eggs.  The fate of the nest (redd) will depend on many factors, first and foremost, the quantity of water available: due to changes in the water level of a tributary, the eggs of the marble trout can dry out or not receive a continuous flow of water throughout their incubation period. Hence, it is clear that the survival of this species also hinges on a correct interaction between man and the environment. The vitality of ecological processes in a watercourse is often determined by the way water resources are exploited; a reduction in flow rate has profound effects on the natural characteristics of a river, altering its morphology, depth, current speed and major abiotic factors, such as the temperature and the amount of oxygen dissolved in the water. The fluctuations in level caused by the extraction of water from a watercourse may dry out the redds and have a devastating impact on the reproductive success of many freshwater fish species. This applies in particular to salmonid species, such as the marble trout, whose numbers have already been dramatically reduced, as these species entrust their new generations to “winter” rivers (which are typically characterised by low flows).

A myriad tiny eyes are making their appearance here and there, in the beds of torrents and rivers  from Piedmont to Slovenia: what will they see? The rivers are watching us and we should all feel responsible for the health of our marvellous watercourses! There is much to be gained, for everyone!